Pain between the shoulder blades from a cervical disc, stenosis or impingement, look at the chart below for proof this is 100% impossible.

June 6, 2016 by Dr. Mitchell Yass in Uncategorized
0
The Yass Method coming to a town near you. Get treated and get resolved.
Visual Proof- Sciatica from impingememt of piriformis muscle versus structural variation from lumbar spine. 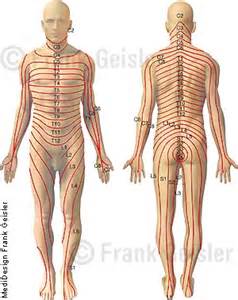 Look at this chart. Look at the location of the area between the shoulder blades. You will see that this area is at the level that relates to the “thoracic spine” not the “cervical spine”. What this means is that any type of structural variation found relating to the cervical spine including herniated discs, stenosis of a cervical nerve root or nerve root impingment of a cervical nerve root can never cause a symptom in the region between the shoulder blades. The MRI is only capable of identifying the spinal cord and nerve roots that come off the spinal cord at every level. it is incapable of identifying nerves that are formed by the nerve roots after they have left the spinal column and joined together to form nerves among other tissue that the nerves pass through. So the MRI speaks specifically to the nerve roots as being structurally affected creating the symptoms you are experiencing.

The nerve roots whether described as being associated with a herniated disc, stenosis or nerve root impingement create symptoms in very specific areas of the body known as dermatomes. These areas of the body are what are presented in the chart above. So just because a hernaited disc, nerve root impingement or stenosis are identified, if the symptom that is being experienced is not in the area that the nerve root innervates then it is impossible to say that the structural variation is the cause of the symptoms. As can clearly be seen in the chart, there is no cervical nerve root that creates symptoms in the area between the shoulder blades.

The issue that confuses people is when a picture is presented to them showing the structural variation with the understanding that simply because the variation exists that it requires treatment. That’s the scam. These variations often take decades to occur and don’t elicit pain. Nobody seems concerned about getting wrinkles requiring grafts. These types of structural variations in the spine must be seen as the same types of deterioration as wrinkles. It is nothing more than a cultural derived creation that insights fear in people that the identification of these structural variations requires some type of intervention. The mere uttering of these medical phrases is part of the methodology to create fear and a sense of imminent danger. A simple question to be answered: why do 90% of people over the age of 60 WHO HAVE NO BACK PAIN have bulging or degernative discs? Should these people get surgery for these structural variations simply because they exist even though they have no pain?

So it doesn’t matter how many opinions you get, it doesn’t matter what the specialty of the person giving you the opinion is, it doesn’t even matter if the opinion is coming from the queen of England or the King of Siam, it is 100% irrifutable, unequivocable and undeniable that a cervical nerve root cannot create a symptom between the shoulder blades. And so for all of the poor unfortunate souls who have received treatment for the cervical spine to address pain between the shoulder blades who have figured out that this didn’t make sense, here is your vindication and your chance to get the right diagnosis with the only true method that discounts diagnostic test findings and interprets the body’s presentation of symptoms to identify the correct tissue eliciting the symptoms. The Yass Method clearly understands that facts are the key to getting the right diagnosis. It allows for all potential causes of pain to be identified. In this case, the possibility that the muscles between the shoulder blades straining due to shoulder dysfunction is real and needs to be investigated.

You have few choices at this point in finding the true cause of your symptoms. The Yass Method is the only true method. Let’s be very clear, the system will not change for you. YOU WILL HAVE TO CHANGE THE SYSTEM! Share this post with a friend and save a life!